Code Repositories
Find and share code repositories
Turn on suggestions
Auto-suggest helps you quickly narrow down your search results by suggesting possible matches as you type.
Showing results for
Show  only  | Search instead for
Did you mean:
Advanced Search
Options
Options

Watch the Youtube installation of the Alarm Fatigue Demo: https://www.youtube.com/watch?v=Kilnu-YOCcc&feature=youtu.be

The Alarm Fatigue Demo consists of a custom Ambari Service called "Alarm Fatigue Demo Control", which generates patient vitals every 5 seconds for 4 devices (4 patients). NiFi is used to pull the vitals (tailing the log file), stores all vitals in Hive, enriching the data (from Hive) and storing the data in Kafka. Streaming Analytics Manager then picks up the enriched patient information (with vitals) real-time, stores enriched data in HDFS, then aggregating the vitals every 1 minute, storing the aggregates in Druid cubes, and finally running rules (pulseRate > 100) and then sending notification(s) to the doctor - reducing Alarm Fatigue.

What is “Alarm Fatigue”?

Alarm fatigue or alert fatigue occurs when one is exposed to a large number of frequent alarms (alerts) and consequently becomes desensitized to them. Desensitization can lead to longer response times or to missing important alarms. There were 138 preventable deaths between 2010 and 2015, caused from alarm fatigue. (https://en.wikipedia.org/wiki/Alarm_fatigue)

How can Alarm Fatigue be reduced?

Instead of only sounding an alarm, being heard by the closest nurse or doctor, a notification should be sent to the proper doctor/nurse containing a severity level and acknowledgement.

What will HDP/HDF do to reduce Alarm Fatigue?

It all starts on the edge device, being the various sensors in a hospital room (blood pressure, pulse rate monitor, respiratory rate monitor, thermometer, etc:.). For this use-case, we will assume our target hospital contains sensors with active connections to raspberry pi device(s). The raspberry pi device will gather logs from the sensors, therefore we will install MiNiFi and tail the logs. MiNiFi will then bi-directionally communicate with a centralized NiFi instance located at the hospital. 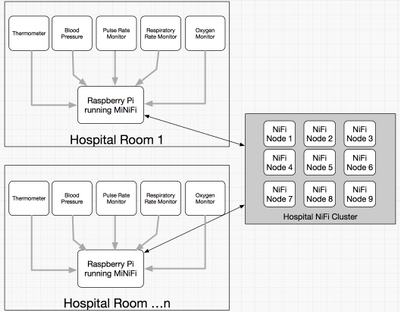 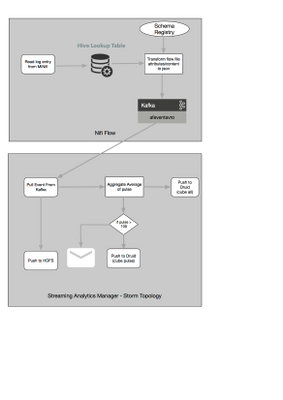