How can teams located in different locations can work on the same NiFi dataflow at  same or different time? 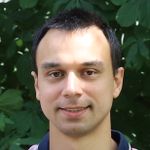 In general the Nifi UI is designed for multi tenancy, so there should not be a problem that people technically block each other.

However it is of course possible that people logically block each other, for instance by trying to edit the same processor or by suddenly stopping the flow.

In general the process group is the unit of collaboration, so consider making process groups and letting only 1 team develop each at the same time.

The other half of the problem could be solved by agreeing on the specifications where the work of two teams touch, and decouple it somehow.

Suppose you could make the flow into two parts, team 1 works on part 1, team 2 works on part 2. Then team 1 should not face too many dependencies. Team 2 however would want to run their flow against the new spec of messages coming in. If needed you can mock up the messages somehow, but if the output from team 1 remains fairly stable in content and availability is the main concern, then putting a (replayable) buffer like Kafka in between can also help a lot.

If this answer helped, please mark it as 'solved' and/or if it is valuable for future readers please apply 'kudos'.
Reply
491 Views
0 Kudos