We have configured Nifi via Ambari HDF. Its a 3 node cluster. It was working since last 2 weeks but suddenly now we are facing issues while accessing Web UI.

Currently i am getting below error while access the UI.

Cannot replicate request to Node ip-*******.eu-central-1.compute.internal:8080 because the node is not connected

At times, i am able to access the UI but than after few seconds it refresh and pops up with this error. I have tried starting and stopping all components but the problem still persists.

Anyone who has faced similar issue? What is the solution?

NiFi uses zookeeper when clustered for election of both Cluster Coordinator and Primary node. Once a Cluster coordinator has been elected, all nodes in your cluster will start sending heartbeats to that node. If heartbeats are not received in a timely manor, the node may become disconnected. Should the heartbeat from a disconnected node come in later, the node will go through the process of connection to the cluster again.

There are a couple common reason that may cause issues with heartbeats.

2. Excessive Java garbage collection (stop-the-world events) occurring on your NiFi node(s). During GC heartbeats will not be sent.

To see if it is just a small latency issue, try adjusting the following timeout settings in NiFi: 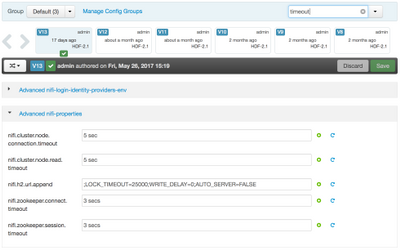 These changes will require a NiFi restart to take affect.