The default way this works (and the only way it works in versions of NiFi previous to Apache NiFi 1.2.0 or HDF 3.0) is as follows:

As you can see by this default distribution model, the data may not always be distributed as desired. The reason this transfer was implemented this way was for performance reasons. However, when working with very small FlowFiles, where FlowFiles come in a wide range of sizes from small to large, when a better network connection exists between one target node than another, or data comes in bursts instead of continuous flow, the load-balancing will be less than ideal.

With the introduction of HDF 3.0 (Apache NiFi 1.2.0). additional configuration options were added to the RPG to control the number of FlowFiles (count), amount of data (size), and/or length of transaction time (duration) per RPG port connection. This gives users the ability to fine-tune their RPG connection to achieve better load-balancing results when dealing with lighter volume dataflows, network performance differences between nodes, etc.

These new configuration options can be set as follows: 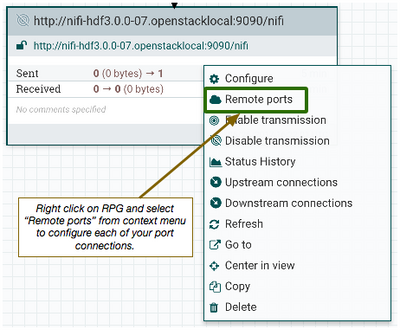 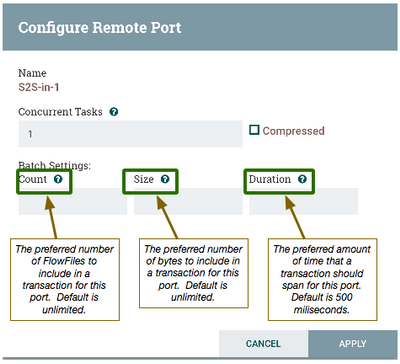 Each input and output port configuration will need to be set individually.

Of course, setting count to a value of 1 sounds like a good way to achieve really good load-balancing, but it will cost you in performance since only one FlowFile will be sent in each transaction. So, there will be extra overhead introduced due to the volume of new connections being opened and closed. So you may find yourself playing around with these settings to achieve your desired load-balancing to performance ratio.

How do I get better load-balancing in an older version of NiFi?

The RPG will send data based on what is currently in the incoming queue per transaction. By limiting the size of that queue, you can control the max number of FlowFiles that will transfer per transaction. You can set the size of object back pressure thresholds on those incoming queues to limit the number of FlowFiles queued at any given time. This will cause FlowFiles to queue on the next upstream connection in the dataflow. If a source processor is feeding the RPG directly, try putting an updateAttribute processor between that source processor and the RPG so you have two connections. As each RPG execution runs and transfers what is on the queue, the queue will be refilled for the next transaction.

Apache NiFi 1.13+ update:  In newer releases of NiFi, the ability to redistribute FlowFiles within the cluster was made much more efficient and easier through the new load-balanced connection feature. This new feature (stable in Apache NIFi 1.13+ versions) is a simple configuration change that can be done on a connection. It supports numerous strategies for redistribution of FlowFiles, but for load-balanced distribution, it offers a true round-robin capability you can't get from an RPG.