In this tutorial, we will enable rsyslog to forward syslog messages to localhost on port 7780 as following:

- Restart syslog for the changes to take effect:

- You can optionally read from the port 7780 to make sure that data is forwarded to port 7780 using tcpdump utility. tcpdump utility is not installed by default on the sandbox. You can install it as following:

- You can read from the udp port 7780 using the following command:

If not seeing any entries, open a new ssh session, you should entries from pam_unix during authentication from tcpdump. 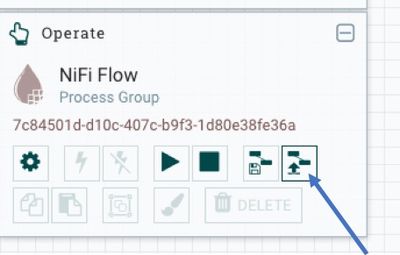 - Drag the Add Template icon to the NiFi canvas:

- Choose the template SyslogUserMonitoring you just uploaded to NiFi.

- You should see the following NiFi Data Flow: 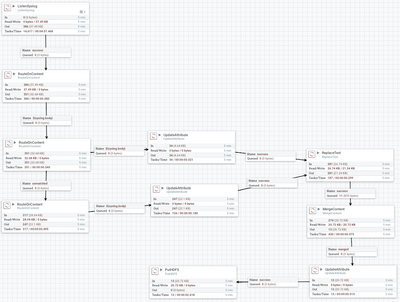 - Before starting the NiFi flow, please create a directory /tmp/rsyslogs on HDFS where all the syslog entries ingested will be written. Open up all privileges to all on that directory to avoid any permission issues for NiFi. You could use the Ambari Files view to create the directory:

- By default, you may not get so much login activity on your sandbox. You can create some login activity by using the following script on your own sandbox. The script scans /etc/passwd for users and opens sessions through su, and failed authentications through sudo commands to just run echo commands. Please copy and paste the script below and save it as gensessions.sh as root on your sandbox.

Caution: Run this script at your own risk in a self-contained environment such as the sandbox only on your laptop, and not environments monitored by corporate security where the script can generate false alerts and lock you out.

- Open a new ssh session and run the script as root as following:

- You can now start the NiFi Data Flow by clicking on Start: 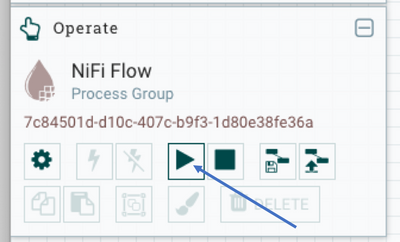 - After a few minutes, you should see files added in /tmp/rsyslogs in the Ambari File View.

- Open the Hive view in Ambari and create the user_sessions external table as follows:

- You can view a sample of the data to make sure the data is now accessible through Hive by clicking on the icon 'Load sample data' next to the table in the Database Explorer: 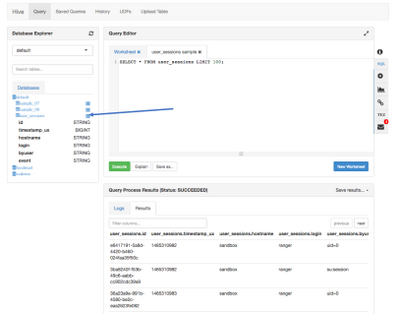 At this point, we have ingested unstructured syslog text message through NiFi and extracted structured insights about user sessions activity to be able to do further analysis on it. We can now visualize this data using Apache Zeppelin.

- We can visualize the top 10 users opening most sessions against the sandbox using the following SparkSQL query:

- We can also visualize for example the top 10 users with failed login attempts against the sandbox using the following SparkSQL query:

- The data can be visualized in a pie chart as following:

- We can also try to visualize the number of open sessions per minute on the sandbox using the following query:

- We may also want to identify periods where failed logins are higher to identify a potential attack pattern using the following query:

- The data above can be visualized using bar graphs as following: 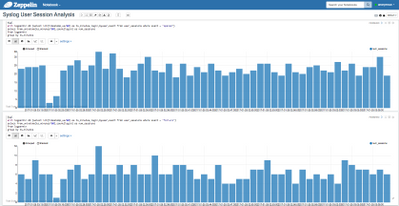 Many other queries can be ran such as trying to identify if there is a particular user causing the failed logins. In this case, the running script generates a random activity, which is the distribution you are seeing in these analytics.