Record based processors in Apache NiFi 1.2

Each of the Reader and Writer objects will support interaction with another Controller Service which will be referencing a schema registry for retrieving schemas when necessary. An Avro schema registry and an HWX schema registry will be immediately available in Apache NiFi 1.2. To use the Avro schema registry, a user needs to provide the actual schema when configuring the “AvroSchemaRegistry” controller service, and the schema information will be written to the flow.xml file. Another alternative is to use the HWX schema registry, which provides a centralized place to store reusable schemas, as well as storing the compatibility info between different schema versions.

To further understand the record based operation mechanism, think of a CSV file with 100 rows and 5 fields, a record orientated processor will be able to read the CSV bytes row by row (leveraging a Record Reader CS), deserialize the CSV bytes into 100 record objects, and store those record objects in memory. and the same processor can potentially leverage a Record Writer CS to serialize the in-memory record objects into the specified output format. On top of all that, a “QueryRecord” processor allows users to define free-form SQL queries to be executed against the in-memory record objects, and be able to map SQL results to one or more output relationships.

Now let’s take a closer look at a use case below, in which I am trying to configure a record based ConsumeKafka processor. 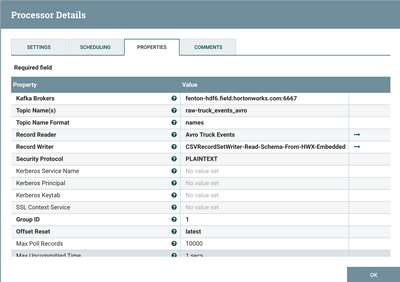 Drill into the “Avro Truck Events” record reader, you can see the following schema access strategies out of the box: 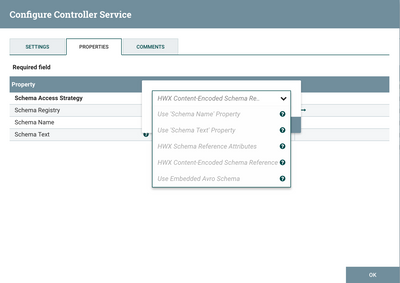 User needs to point the CS to a legit schema registry, and provide a referenceable schema name in the ’schema name’ property. Notice that, with this option, schema version is not configurable, meaning that the record reader CS will always automatically grab the latest schema version from the schema registry.
use ‘schema text’ property
with this option selected, user needs to manually type in the schema in the ’Schema Text’ property. Notice that this is not used in conjunction with a schema registry. In a future NiFi release, with ‘dependent properties’ enabled (https://issues.apache.org/jira/browse/NIFI-1121), the ’Schema Registry’ property can be hidden on the UI when this option is selected.
HWX Schema Reference Attributes
with this option selected, we assume that the identifier and version of the schema will be stored as attributes on any incoming flow files. To be exact, we are talking about the following attributes: 1. schema version attribute, 2. schema ID attribute and 3. version protocol attribute. For a processor that doesn’t take any incoming flow files, such as the ConsumeKafkaRecord in our use case, such option would not be very useful.
HWX Content-Encoded Schema Reference
with this option selected, the record reader CS will look for the identifier and version of the schema in the actual payload, assuming the first 14 bytes of the payload indicate this information.
Use Embedded Avro Schema with this option selected, the record reader CS will look for the actual schema (not the fingerprint) in the payload, and this option only works for Avro format. Last but not least, when the actual schema of your payload is not matching with the schema retrieved from the schema registry, the following logic applies:
11,821 Views
7 Kudos
Tags (6)
Take a Tour of the Community
Community Browser
Have a Cloudera Account?
Sign In
Don't have an account?
Register
Your experience may be limited. Sign in to explore more.
Announcements
Community Announcements
January 2023 Community Highlights
Product Announcements
[ANNOUNCE] New Cloudera JDBC Connector 2.6.30 for Impala is Released
What's New @ Cloudera
Cloudera Operational Database (COD) provides a CLI option to enable HBase region canaries
What's New @ Cloudera
Cloudera Operational Database (COD) supports creating an operational database using a predefined Data Lake template
What's New @ Cloudera
Cloudera Operational Database (COD) supports configuring JWT authentication for your HBase clients
View More Announcements
Version history
Last update:
‎08-17-2019 01:02 PM
Updated by:
hliu
Contributors
Top Kudoed Authors
View Full Leaderboard