Find answers, ask questions, and share your expertise
Turn on suggestions
Auto-suggest helps you quickly narrow down your search results by suggesting possible matches as you type.
Showing results for
Show  only  | Search instead for
Did you mean:
Advanced Search
Options
Options

How to integrate Nifi with LDAP by using Ranger policy.

Ranger is integrated with LDAP and able to login Ranger UI through domain user.

I've made changes as per
https://pierrevillard.com/2017/01/24/integration-of-nifi-with-ldap/
But still I'm unable to get login

below is the configurations:

Is NiFi displaying the login screen or just blocking access to the UI?

If you are seeing a login screen, what do you see in the nifi-user.log after supplying your username and password?

Sorry, I am not following what you mean by "It is auto login through anonymous user"

1. Server requests user/client certificate --> if client present valid trusted certificate then it is what will be used to authenticate
*** If above fails the rest of the methods must be configured in NiFi before they will be tried in this order.
2. SPNEGO --> if client presents a user principal via the http connection and it is validated, it will be used for authentication.
3. Either ldap-provider or kerberos-provider --> If both the above fail and a login-identity-provider has been configured, the user will be presented with a login screen which will be used for user authentication.

In your case, you appear to be using LDAPS with in the ldap-provider.
I am curious about your configured "User Search Base" and "User Search Filter" as they appear to be specific to just the nifiadmin user. In that case the the LDAPS search would only ever be able to return credentials for nifiadmin user. If you are trying to login in with some other user, that would explain the "The supplied username and password are not valid".

The next question is what method are you using for user authorization (this occurs after successful authentication.
Options include either NiFi's built-in file based authorizer or an external service like RANGER.

With the default file-based authorizer, you should have configured an "initial admin identity" and "node identities" for each node in your NiFi cluster.

You are saying you actually see the canvas which means some form of authentication and authorization is being successful.

The user log snippet you shared only shows successful authentication for what appears to be the DN for a nifi node? Di you load your nodes cert in to your browser per chance? If not did you authorize "anonymous" in your users.xml and authorizations.xml files?

@Matt
As per your suggestion I have made changes in configurations but still I'm facing the same issue.

Nifi and Ranger is need to authenticate with Ldap.

Ranger is authenticated with ldap (still it is not working well with ldaps).

Nifi UI is accessible through client certificate. But I wanted to use ldaps.

So I've disabled client certificate authentication in browser but then Nifi UI is directly login with anonymous user instead of giving login page. I'm struggling to identify the mistake from my configuration. I've attached screenshot of Nifi UI.

There are a few questions that need to be asked here....

You stated that you installed HDF NiFi and Ranger services. Please provide the current values assigned to the following properties in the nifi.properties file:

It also may be helpful if you provided your login-identity-providers.xml file and you authorizers.xml file.

So Anonymous is what is being passed to the authorizer. Question here is who really is your currently configured authorizer? NiFi's file based authorizer or Ranger?

The file-based authorizer uses the users.xml and authorizations.xml files of which you provided and I do not see anonymous in there anywhere. But if you are using Ranger, these files are not used anyway.

Is there anything, I can do changes in Ranger or edit Policy to get the login page on Nifi UI?

Still its not working. users tab is not showing in Nifi UI at burger menu. Screenshot is attached. Please suggest. 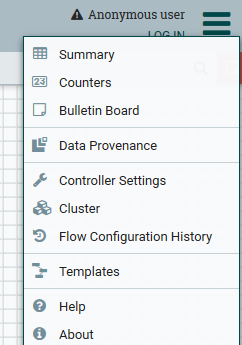 Can you please suggest on above scenarios ?

* HCC Hint: try to avoid responding to an answer with another answer. Instead, respond to an answer by clicking "Add comment" under the answer.

When using an external authorizer such as Ranger, the NiFi UI will no longer show the "users" or "Policies" icons or menu items.

I am confused by your login-identity-providers.xml file configuration. Specifically,

LDAPS requires that all communications are directly to secure end-point, so URL should start with ldaps://

Is it possible that your LDAP server is really setup for START_TLS? It is very similar to LDAPS (LDAPS was deprecated in favor of START_TLS) except initial connection if to ldap:// and then redirected to ldaps://

Try setting the Authentication Strategy to "START_TLS" and see if that works.

Thanks for the suggestion about comments.

I have tried with START_TLS and ldaps:// url as well but still not working.

I have tried to connect ldap with SIMPLE option as well. But still Nifi is not syncing with LDAP.

How I can connect Nifi UI through LDAP/AD users?

Can you please suggest on below configuration:

NiFi does not sync with LDAP. LDAP is simply used for user authentication.

You said you get the login screen, but once you enter a valid username and password you get logged in as anonymous?

Or you never see login screen and you are logged in as anonymous automatically?

What get returned if you run a ldapsearch command from your NiFi server?

Does the returned listing include your nifiadmin or domain users?

In Nifi UI, It is automatically logged in through anonymous user. But at the top there is option to log in through different user. Please check screenshot attached. I tried to login with another user but doesn't work.

with your ldapsearch command gives below output.

Please check below output as well

Port 389 is open and telnet is working fine from Nifi server to LDAP server. It doesn not return with nifiadmin or domain users.

What could be the reason?

How can I login Nifi UI with ldap user?

I have copied keystore.jks and truststore.jks files from Nifi server to Ranger policy and Now I'm able to do login Nifi UI with LDAP users.

My next challenge is I wanted to do user authentication with LDAPS. In Ranger UI I'm able to do log in with LDAP authentication but when I do the changes for LDAPS, it doesn't work. Can you please suggest

I am not an expert on Ranger. Since your NiFi piece is now working, I suggest accepting an answer in this thread and starting a new HCC post around enabling LDAPS within Ranger. Other community members who are Ranger experts are unlikely to see this latest question.

I found the solution. Issue is fixed now.

In my case, one of LDAP username is 'dvteam' but in LDAP database there was full description of username as 'architecture dev team, locations, team details, etc'.

Error messages I found in nifi-user.log. is 'architecture dev team' user was trying to authenticate with nifi nodes. Authentication was successful but authorizations not happening.

later I've changed to use_dn. because as per nifi-user log authentication is happening with LDAP user 'architecture dev team'.

So in my case user_username was not working for authentications.

Every configurations changes I used to remove authorizations.xml and users.xml file from my all nifi nodes.

Also There was confusion on about 'OU' in Node identities section.

What does it mean OU in node identities section? I don't know yet.

After setting above all, I was facing an error about setting nifi.security.identity.mapping.pattern.dn.

There was a challenge about the pattern definition.

There was 4 'ou' I have defined in initial admin identities and login-identity-providers.xml.

So I've used below pattern and it worked well.

Note: I have removed Ranger completely.

Hey Suraj, so you were able to integrate LDAP with NIFI and manage users with LDAP right? Ranger is completely out of picture. You are not using it for authorization.