Today I downloaded the Sandbox from http://hortonworks.com/downloads/#sandbox When I start it though it seems like some but not all components are launched. First the Virtualbox screen is stuck in this mode: 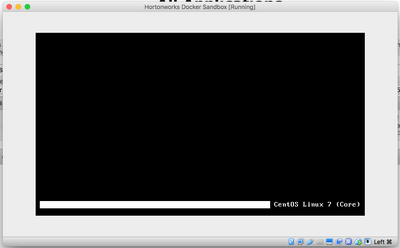 When you hit a button I get more info: 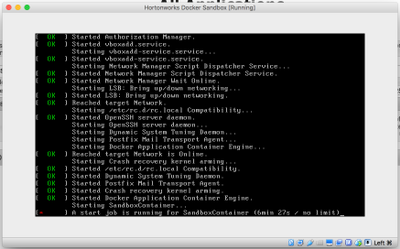 The time counter just runs forever. By this time the Ambari login screen is up and the YARN app WebUI on 8088 as well, but that is it. It is stuck on start up. What is going on? 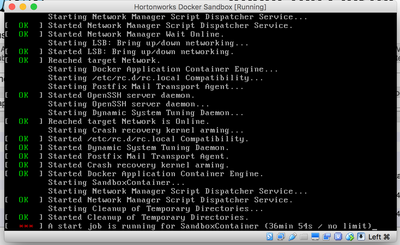 After 36 minutes it it still doing something

Well, I turned to the Docker version instead. That one is working!

I am also facing the same problem. But I soved it by deleting the virtual box logs which is located at

Delete only those files which have names like 'VBoxSVC.log' .Remember to do this step only when your virtualbox is closed.

I tried to start the sandbox (HDP 2.6, 8 GB assigned) on a Core i7 with 16 GB RAM. Booting is not finished after more than 30 hours (CPU is very busy). Free RAM is available, according to the task manager VirtualBox is using about 124 MB of RAM only. Is there anything I could do?

The problem is virtualbox. With vmware everything is working as expected.

Initially it starts up fine, but any of my attempts to shutdown the "docker" container for the sandox gracefully failed, and just shutting down the host VM via the VMware Player window resulted in the SandboxContainer startup hanging at the next startup.

Sending shutdown commands to the docker OS (NOT to the host VM OS) via SSH does not work because of some permission issues.

I ended up starting up the VM initially and never shutting it down, only suspending. Will stick with this workaround until I stumble upon a way to shutdown the sandbox containter gracefully and only THEN shutting down the host VM.

I miss the days when the sandbox was running on just a plain VM instead of this VM+docker combo. You can't even see what happens when the docker is being started...

Same problem here. I am running the HDP sandbox 2.6.1 on VirtualBox 5.1.26 on a Centos 7 host. The VM never finishes booting. see attached screen shot. After about 10 minutes it is still starting the sandbox container (hdp1.png), and after 3 days it is stuck between cleaning up temporary directories and network manager script dispatcher (hdp2.png).

Any ideas? I have the same problem with Oracle VB

@Paul Hodor, just ignore the message and type in

@Paul Hodor just ignore the message and type in

If you see "Starting SandboxContainer.." then you're already up and running. Just navigate to http://127.0.0.1:8080/ on your host machine and the Ambari login screen should pop up.

The default admin login is raj_ops/raj_ops

If you see "Starting SandboxContainer..." then it's already up and running.

I am able to start the Sandbox on Windows 10 and Oracle VirtualBox.

Initially I also faced same problem, Sanbox was not starting even after setting RAM to 12GB. (waited for more than 1 hour)

So I removed the sandbox image from VirtualBox, closed the virtualbox application, used Ccleaner to clean temp files, and restarted windows .

After restart I reloaded the sandbox image in VirtualBox and set the RAM to 11111 (close to 11GB).

after that sandbox did work, It did took some time to start up.

After that I also tried running it with 10GB RAM but did not worked.

Still wonder why it did not worked with 12GB RAM, but worked later with close to 11GB,

My suspect is something to do with temp files , May be I am wrong. I am not sure.

But give it a try and see if that works for you.

I have resolved this issue by switch off name node safe mode to off(leave).

you will get "Safe mode is OFF" message. Now try to start services.

sandbox seems to stuck at the following .

Also, there seems to be a following error

please advise. have 16gm on a windows 10 machine .