What's New @ Cloudera
Find the latest Cloudera product news
Turn on suggestions
Auto-suggest helps you quickly narrow down your search results by suggesting possible matches as you type.
Showing results for
Show  only  | Search instead for
Did you mean:
Advanced Search
Announcements
Check out our newest addition to the community, the Cloudera Innovation Accelerator group hub.
Options
Options

PBJ Workbench Runtimes are now part of the Jupyter ecosystem

The ML Runtimes 2022.04-1 Release includes a technical preview version of the new workbench architecture, the PBJ (Powered by Jupyter) Workbench. In the previous Workbench editor, the code and output shown in the console (the right-hand pane in the image below) were passed to and from Python, R, or Scala via a Cloudera-specific, custom messaging protocol. In the PBJ Workbench, on the other hand, the code and output are now passed to and from the target language runtime via the Jupyter messaging protocol. They are handled inside the runtime container by a Jupyter kernel and rendered in your browser by JupyterLab’s client code.

This may seem like a subtle change, but it will provide CML users with some major benefits. First, the behavior of user code and third-party libraries on CML will be more consistent with its behavior in Jupyter-based environments. That means that a wider variety of rich visualization libraries will work out of the box, and in cases where rich visualization libraries do not work, error messages in the CML console and the browser console will be easier to google. Likewise, dependency conflicts between kernel code and user code will be rarer, and when they do occur they will be easier for customers to diagnose and fix. To give you a taste of what this higher degree of consistency is like, note that Python 3’s input() function now works. Go ahead and try it out! 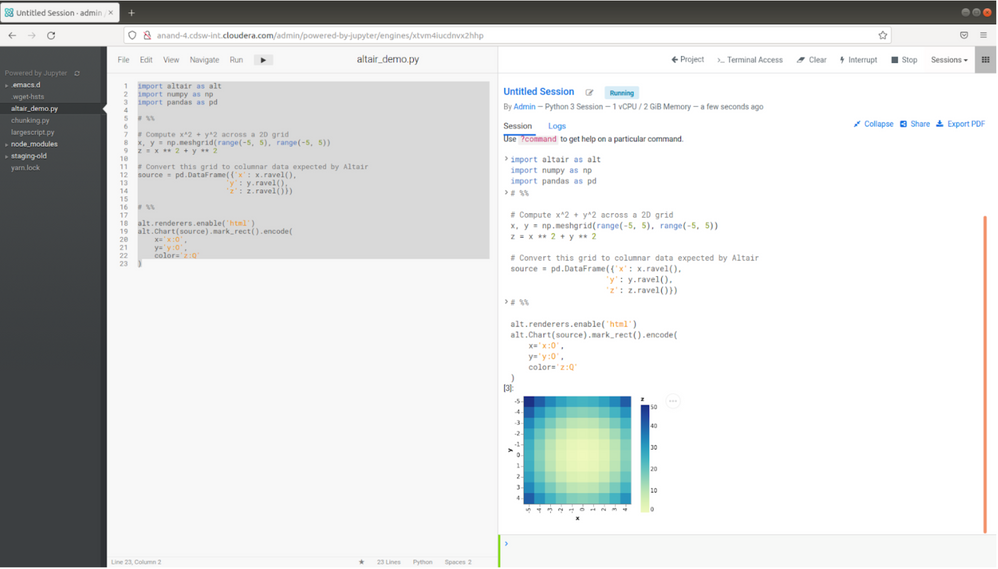 You can try it out by running a PBJ Workbench Python session using a CML April or newer Workspace. The look and feel of the workbench will be more or less unchanged. Under the hood, however, the way that code and outputs are rendered and passed between the web app and the Python interpreter have been re-engineered to better align with the Jupyter ecosystem.

With the launch of CDP Public Cloud 7.2.15, Cloudera Streaming Analytics for Data Hub deployments has gotten some powerful new features with support for Dead Letter Queues.

The latest release of Cloudera DataFlow for the Public Cloud (CDF-PC 2.0.0-b302) adds support for NiFi flows that listen for incoming data (e.g. through ListenHTTP, ListenTCP, ListenSyslog processors) and allows users to deploy them in a cloud-native, Kubernetes based runtime with improved monitoring and auto-scaling capabilities.

Data warehouse users require constantly improving performance, regardless of data volumes or number of end users, with tools that are ever easier to use. Cloudera just released a capability that answers each of those calls, providing significant performance improvements that apply regardless of scale and that are almost trivial to set up. We are pleased to announce the general availability of Unified Analytics within Cloudera Data Warehouse (CDW) - our cloud native data warehouse service available in Cloudera Data Platform (CDP).

Cloudera Logging is a new Apache Log4j 1.2.x compatible logging library included with CDP Private Cloud Base 7.1.7 SP1 that is created, distributed, and maintained by Cloudera to address the recent vulnerabilities in Apache Log4j 1.2.x.

What does Cloudera's new Long Term Support (LTS) release for mean for customers?  Do you stand to benefit from it?   In this article we'll answer some of the common questions around  the LTS release for CDP Private Cloud Base.

With the launch of CDP Public Cloud 7.2.14, Cloudera Streams Messaging for Data Hub deployments has gotten some powerful new features! In this release, the Streams Messaging templates in Data Hub will come with Apache Kafka 2.8 and Cruise Control 2.5 providing new core features and fixes. KConnect has been added and gains additional capabilities with new connectors and Stateless Apache NiFi capabilities which can run NiFi Flows as connectors.  The Schema Registry will now support JSON schemas in addition to the Apache Avro schemas already supported and will gain the ability to perform native API based import and export to share schemas between environments.

COD now supports the “Storefile Tracking” (SFT) as an optional feature in Runtime 7.2.14.0.

COD supports custom table coprocessors, which you can implement and extend from HBase coprocessors’ interfaces.

COD supports RAZ integration from the Runtime version 7.2.11.0. You can grant fine-grained access to directories.

COD is now bundled with the HBase version 2.4.6

For a smooth and better functionality, COD is now bundled with the HBase version 2.4.6. You need to upgrade the HBase client version for seamless connectivity.

Starting with the February release (v1.14) of CDE , Apache Iceberg tables are now supported with Spark 3 virtual clusters on AWS. Users can query and work with tables at petabyte scale without impacting query planning, while benefiting from efficient metadata management, snapshotting, and time-travel.

The latest release of Cloudera DataFlow for the Public Cloud (CDF-PC 1.1.0-b127) allows Microsoft Azure users to run their Apache NiFi flows in a cloud-native, Kubernetes based runtime with improved monitoring and auto-scaling capabilities.

This release also introduces the following new features for both, AWS and Azure customers:

COD is now available on GCP as Technical Preview, in addition to AWS and Azure.

CDP Operational Database (COD) supports copying tables from one COD cluster to another.

Cloudera supports upgrading to a runtime version with downtime

Cloudera supports upgrading an installed runtime version to an advanced one with downtime.

With CML's multi-version Spark support, CML users can now run different versions of Spark side by side, even within a single project.