HiveServer2 shows failure - but starts after upgrading to Ambari 2.4.2

After upgrading Ambari to 2.4.2.0 when i start Hive service the operation output is red with an error - but Hive is green, up & running without any problems.

Here is the error: 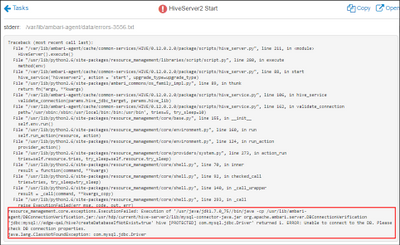 But this is the actual result - the restart indicator still exists and Hive is green. I'm also able to connect to hive using beeline and work as usual. 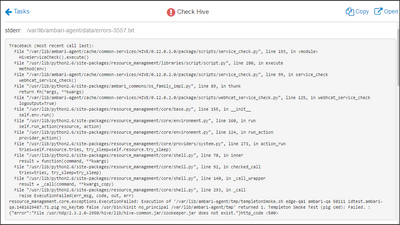 The hiveserver2.log is free of errors and Hive is working properly ! I can live with this but i'm afraid that i will have problems with upgrading the HDP because one of the prerequisites is successful service check...

Please run the below command:

And place the following symlink on all hosts (specially hive host)

Looks like ambari is removing the mysql-connector jars symlink.

The changes that i suggested above to create the symlink is because it is not the "hiveserver2" failing but the "hive_service.py" is failing. Which is looking for the mysql jar.

From your 3rd error screen shot it looks like the "zookeeper.jar" path is set incorrectly.

- In the image we see that the zookeeper.jar path is incorrect.

- The "templeton.libjars" can be set via ambari

Thank you for your reply

The "templeton.libjars" Property hasen't been changed so i'm kind of baffled why i need to "correct" it. I do agree that the path which the service check is looking seems corrupt:

It seems like a bug in the service check.... there can't be a .jar file under a .jar file... Or am i missing here something ?

- Else please compare the value of "templeton.libjars" property from any of your working environment and you will find that it will be same as above.

I've compared to other working environments and the value is the same in all of them: 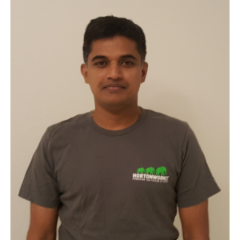 It seems Hive Metastore is having an issue with hive DB.

The HIVE metastore is a different host to the host running HiveServer2. Permissions on the metastore do not allow connections from the HiveServer2 host.

Thank you for replying!

The HIVE metastore is on the same host as the running HiveServer2. Nothing was changed in the hive mysql \ metastore- only Ambari was upgraded. That's the only change. Also - if there was a problem with connection between the HS2 to the metastore - Hive wouldn't work, but fortunately it works without a problem!

I have NO problems with restarting Hive nor working with it. I can connect to any Hive DBs, query as usual. Permissions are working. Everything seems normal and green. My problem is that the restart indicator doesn't go away + restarting produces error although it succeeds with restarting + service check fails.

in your error logs , it says that the com.mysql.jdbc.driver could not be located. can you see if the mysql jdbc jar is in the location used by the service check. As per logs it should be at /usr/hdp/current/hive-server2/lib/mysql-connector-java.jar.

2. mysql connection JDBC jar is missing >> pelase check if the JAR is present or nor? Or If missing then you can copy it from other installation/host.

Still same error in service check. Seems like a straight up bug cause it's searching for hive-common.jar/zookeeper.jar.

I found one in /var/lib/ambari-server/resources/mysql-connector-java.jar and copied it to /usr/hdp/current/hive-server2/lib

After restarting the Hive service - it was gone. I checked it twice.

Here is the before & after using same command " ll | grep mysql"

How can Hive work properly if it has problems connecting to the metastore ?

Good to know that the mysql related error is gone.

- Can you please double check if you have mode the correct changed to it inside the "Hive" ==> "config" ==> "Advanced" ==> "Advanced webhcat-site" config?

- After that you will need to restart the services that requires restart (including the "webhcat").

I probably didn't explain myself correct:

The mysql error isn't gone - the mysql-connector-java.jar file is gone ! I copied it to the /usr/hdp/current/hive-server2/lib path but after restarting the Hive service - the file is gone! It is as if it is being deleted by the restart itself . Look at the screenshot of before and after (The shell in which i did "ll | grep mysql") - it's there, and after restarting - it's not there anymore. The file is gone. Vanished. Disappeared. Regarding the templeton.libjars here is the screenshot after the fix: 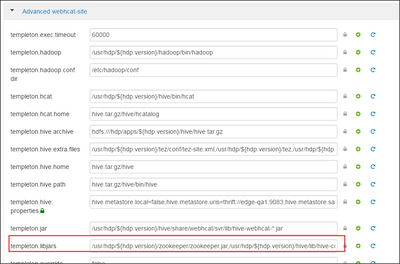 Please run the below command:

And place the following symlink on all hosts (specially hive host)

Looks like ambari is removing the mysql-connector jars symlink.

The changes that i suggested above to create the symlink is because it is not the "hiveserver2" failing but the "hive_service.py" is failing. Which is looking for the mysql jar.

Thank you so much !