This article series is an expansion into the technical details behind the Big Data Processing Engines blog post: https://hortonworks.com/blog/big-data-processing-engines-which-one-do-i-use-part-1/

Here, we will be deep diving into the performance side of the three Big Data Processing Engines discussed in the above blog post: Druid, HBase, and Hive. I ran a number of query types to represent the various workloads generally executed on these processing engines, and measured their performance in a consistent manner. I ran a few tests on each of the three engines to showcase their different strengths, and show where some are less effective (but could still fill the gap in a pinch).

We will be executing the following queries:

A few notes about setup:

Note that this is not an ideal setup for Hive+HBase+Druid. Dedicated nodes for each of these services would yield better numbers but we decided to keep it approachable so you can reproduce these results on your own small cluster. As I laid out, the three processing engines performed about how you would expect given their relative strengths and weaknesses. Take a look at the table below.

Here is that same information in a graph format, with HBase capped at 15s to keep the scale readable. 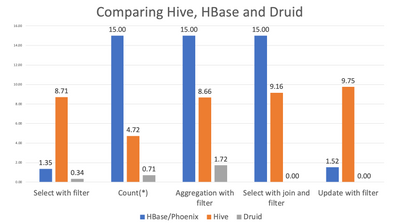 As expected, HBase outshined the other two when it came to ACID operations, with an average of 1.5 seconds on the updates. Druid is not capable of them and Hive took a bit longer. HBase however is not great at aggregation queries, as seen in the ~6 minute query times. Druid is extremely efficient at everything it does, giving no results above 2 seconds and mostly under 1 second. Lastly, Hive with its latest updates has become a real-time database and serviced all queries thrown at it in under 10 seconds.

Here are all of the queries that were run, multiple times each, to arrive at the results above.