Most data movement use cases do not require a “shuffle phase” for redistributing FlowFiles across a NiFi cluster, but there are few cases where it is useful. For example:

In each case, the flow starts with a processor that generates tasks to run (e.g. filenames) followed by the actual execution of those tasks. To scale, tasks need to run on each node in the NiFi cluster, but for consistency, the task generation should only run on the primary node. The solution is to introduce a shuffle (aka load balancing) step in between task generation and task execution.

Processors can be configured to run on the primary node by going to “View Configuration”-> “Scheduling” and selecting “Primary node only” under “Execution”.

Here are two example flows that use this design pattern: 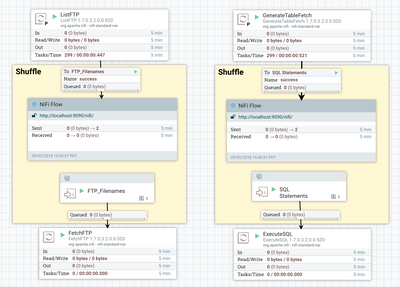