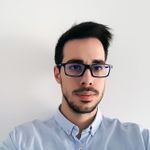 This article will explain how to setup a static edge node as an entry point to a Hadoop cluster deployed using Cloudbreak.

This setup it's not supported by default, because it's not possible to join external vm's in a cluster deployed with Cloudbreak, but in the next article you will find the steps in order to do it.

Cloudbreak is a manager/operator tool to deploy clusters that provides some extra features like scaling, start/stop resources etc in a simple UI. It's a good tool that is growing and sometimes could be a bit rigid and for some core changes on the cluster you will need to deploy a new cluster, for example to change the type of VM or change the HDP version etc.

For this reason in our case we decided to setup a static IaaS virtual machine as edge node, that give us a single and immutable entry point to the cluster, this will never change even we will deploy a new cluster. With this and Knox server we have the ability to deploy a new cluster and then make the switch without deliver again the new URL's and API's to the users. 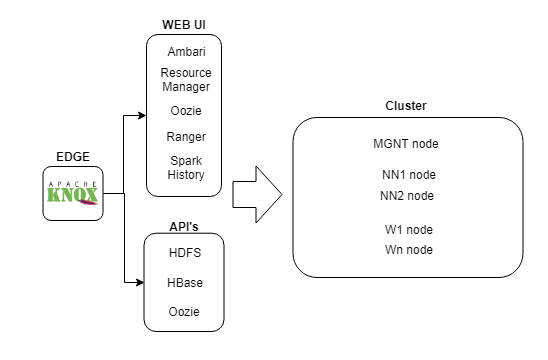 We will divide the article in three parts:

Join the edge node to the cluster

The first that we need to do is join the edge node in the cluster using Ambari in order to have all the  configurations and clients as well.

All the next steps will be performed in the edge node.

Install Knox on the edge node

We will need a Knox server running in the edge node in order to redirect the UI's and API's from the edge to the current cluster.

To setup Knox follow the next steps using Ambari:

After Knox installation and setup, you should be able to access to Ambari UI through Knox URL, or use the WEBHDFS API. This URL depends on your configuration:

This is the core issue that we found when we performed the setup, the previous steps was just the prerequisites before this: When a job is submitted from the edge node, this fails because the edge node was unable to resolve the hostname/ip of workers. Internally, Cloudbreak/Ambari acts like a DNS and provides this information, but in our case Cloudbreak don't recognize the edge node as a cluster node.

When Cloudbreak is used to deploy a cluster and with auto-scaling capabilities in mind, the servers are not registered on the company DNS (usually this requires manual intervention), the hosts are registered internally in Ambari server and Cloudbreak, this is because the number of workers could increase/decrease in hours (scaling).

If your cluster will be static then, you could register all the nodes of the cluster in your DNS company, but probably you will not use Cloudbreak with this approach.

In order to solve the issue with the hostname resolution, what we did was get the information of Hostnames and IP's from Ambari, and populate the /etc/hosts with this information in the edge node.

From Ambari UI and hosts tab we can take the API call to list the servers:

This is the full curl:

We just want the hostname and IP.

With this curl and some transformations we will fix the issue.

We will need to parse the output of this API call in order to populate the /etc/hosts, for this we will need JQ.

We will create an user with "operator" role in order to execute the API call.

In the edge node, with user root for example, create a script in order to get the result from API and overwrite the hosts file.

Create as well a file named "hosts_ini" with the next entries:

This script executed by crontab will do a merge between this entries (localhost) and the entries received from Ambari.

Finally add the script execution in the root crontab to be executed every 30 minutes for example.

With all this steps you will have the file /etc/hosts in the edge node populated with all the nodes from the cluster, and you will be able to submit jobs even you will scale up the cluster.

318 Views
1 Kudo
Explore the Community
Already a User?
Sign In
Don't have an account?
Register
Coming from Hortonworks? Activate your account here
Version history
Revision #:
7 of 7
Last update:
‎10-09-2019 08:56 AM
Updated by: