I have a JSON file coming in from google big query in the format below..(it looks like Google BQ only supports extracting as JSON with newline delimited ).

so i am not able to use that file as regular JSON file and not able to use any JSON processors (Evaluate,Split etc) ..how can i change it to a valid readable file (look below) and use it with other processors.

i do not have a schema for incoming JSON file. 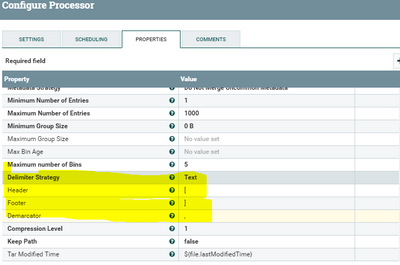 Configure the processor for your desired Minimum number of entries and use Max Bin age as wild card.

Please refer to below link for merge content processor configs.

We can use series of Replace Text processors to make it a valid json and also we need to consider the file size that you are getting if size is big then you need to change maximum buffer size properties in replace text processor but this process will not be optimal, because each time replace text processor needs to keep the file in buffer then apply all the replacements that we configured in the processor.
Instead of this you can easily use SplitText processor then use merge content processor with defragment as merge strategy

(The 'Defragment' algorithm combines fragments(fragment id attribute is added by split text processor) that are associated by attributes back into a single cohesive FlowFile)
by using this strategy we are going have same json messages in valid json array. so that you can use all record based processors to parse this file, by following this way will be more optimal.

Since the data coming in is JSON concatenated together with newlines the first thing you can do is use SplitText to split on newlines. Then the resulting objects are JSON documents at which point in NiFi you can use all kinds of fun processors. The suggestion above to use MergeContent *I think* would head down the opposite path from what I believe the question was but perhaps I understood it incorrectly.

Thanks @jwitt, i missed the first step of splitting, i thought its new flowfile for each message.

Thanks for your input , I am actually following the similar approach. But was trying to see if there is any thing I can do at a file level instead of splitting it .

I am working on NIFI-4456 which will allow the JSON reader/writer to support the "one JSON per line" format as well as the "JSON array" format for input and output, so you will be able to read in one JSON per line and output a JSON array, using ConvertRecord (or any other record-aware processor).

In the meantime, you can use the following crude script in an ExecuteGroovyScript processor to process your entire file (avoiding the Split/Merge pattern), it should get you what you want:

The script just adds array brackets around the whole doc, and separates the lines by a comma. I did the crude version because it doesn't need to load the entire input content into memory. If you need more control over the JSON objects, you could iterate over the lines (still with eachLine), use JsonSlurper to deserialize each string into a JSON object, then add each object to an array, then use JsonOutput to serialize the whole thing back to a string. However that involves having the entire content in memory and could get unwieldy for large input flow files.