In our cluster Namenode switchover is happening everyday . Can anyone please help me in knowing which logs to check for the root cause of switchover which is happening again and again.

Issue is happening in Hortonworks platteform.

Unfortunately, you haven't described your cluster setup but my assumption is that you have 3 Zk's in your HA implementation. There are two components deployed to Hadoop HDFS for implementing Automatic Failover.

These two components are-

1. ZKFailoverController(ZKFC)
The ZKFC is the ZooKeeper client, who is also responsible for managing and monitoring the NameNode state. ZKFC is a client that runs on all nodes on the Hadoop cluster, which is running NameNode.

These 2 components are responsible for:

ZooKeeper session management
It is also responsible for the session management with ZooKeeper. The ZKFC maintains a session open in the ZooKeeper when the local Namenode is healthy. Also, if the Local NameNode is the active NameNode, then with the session, it also holds a special lock “znode”. This lock uses ZooKeeper support for the ”ephemeral” nodes. Thus, if the session gets expires, the lock node will be deleted automatically.

When the local Namenode is healthy and ZKFC finds that no other NameNode acquires the lock “znode”, then it will try by itself to acquire the lock. If it gets successful in obtaining the lock, then ZKFC has won the election, and now it is responsible for running the failover to make its local NameNode active. The failover process run by the ZKFC is similar to the failover process run by the manual failover described in the NameNode High Availability article.

2. ZooKeeper quorum
A ZK quorum is a highly available service for maintaining little amounts of coordination data. It notifies the clients about the changes in that data. It monitors clients for the failures.
The HDFS implementation of automatic failover depends on ZooKeeper for the following things:

How does it detect NN Failure each NameNode machine in the Hadoop cluster maintains a persistent session in the ZooKeeper. If any of the machines crashes, then the ZooKeeper session maintained will get expire—zooKeeper than reveal to all the other NameNodes to start the failover process. 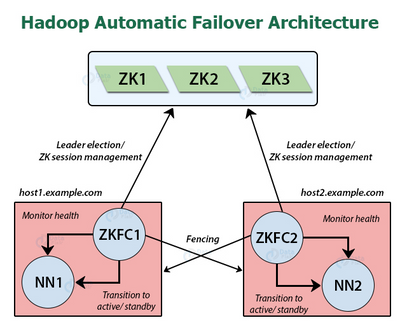 Taking all the above into account, the first component logs to check are Zk and NN,

My suspicion is you have issues with the Namenode heartbeat which makes the zookeeper fail to get the pingback in time and marks the NN as dead and elects a new leader and that keeps happening in a loop. So check those ZK logs to ensure time is set correctly and is in sync!

Thank you for the elaborative answers . In my cluster we have 2 ZKFC and 3 Zookeeper and 2 NN.

I have been through the NN and ZKFC logs and i found the below errors , can we conclude something from it ? 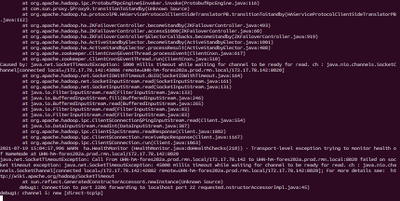 From the logs, I see connectivity loss and that's precisely what's causing the NN switch. Remember in my earlier posting the importance of  Zk quorum!
Your NN and losing Connection to the ZK  so the NN that loses active connection is  causing the ZK to elect a new leader and that's happening in a loop

I would start by checking FW  I see you are on Ubuntu so ensure the FW is disabled across the Cluster.

The root cause of a Socket Timeout is a connectivity failure between the machines, so try the usual process

can you share the value of Core-site.xml parameter  ha.zookeeper.quorum

Thank you for the descriptive response .

Kindly find the value for the asked property as below -

The ZK's look okay please go through the list I shared about the connectivity. Please validae one by one.

@Vinay1991
I mentioned the logs below.You will need definitely the ZK ZKFailoverController logs and NameNode logs