I am running HDP Sandbox in an Azure VM. I can successfully add a disk to the VM and format / mount it. I would like to add it to HDFS to extend my storage. I am performing the following steps to get it recognized:

Unfortunately, everytime I restart the datanode, the dfs.data.dir property reverts back to default. What am I doing wrong?
Reply
2,027 Views
0 Kudos
Tags (3)
1 ACCEPTED SOLUTION

Have you tried changing the setting through the HDFS service in Ambari?

Have you tried changing the setting through the HDFS service in Ambari? 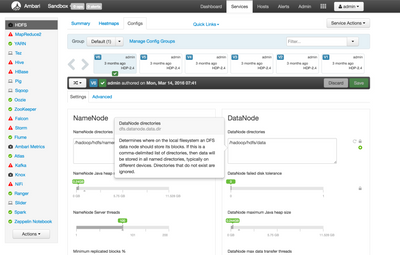 It looks like you should be able to add a directory

I get the following error adding it there: 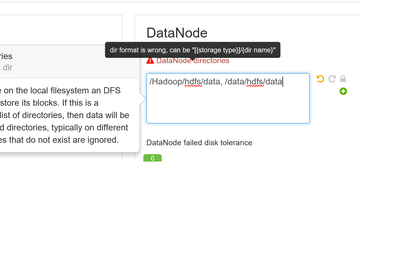 Interesting. So it seems I actually got it to add another directory. These were the steps I followed:

I ran your commands above

After running those commands I moved to Ambari. Moved to the HDFS service. From there instead of using a comma to separate the two, I just put the new directory on a separate line underneath so it looked like:

After this I Ambari asked me to restart a few of the components. (It was taking a while so I ended up rebooting the Sandbox)

After rebooting the Sandbox I went back to the Ambari config and the new directory I added earlier was still present. 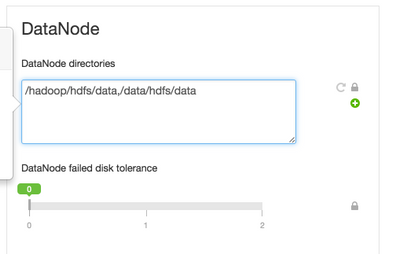 Thanks @zblanco! Removing the comma did the trick.