How to add ports to the HDP 2.5 VirtualBox Sandbox

This tutorial will guide you through the process of adding additional ports to the VirtualBox version of the HDP 2.5 sandbox.

Startup your HDP sandbox. It should be called Hortonworks Docker Sandbox within VirtualBox. You should see something similar to this: 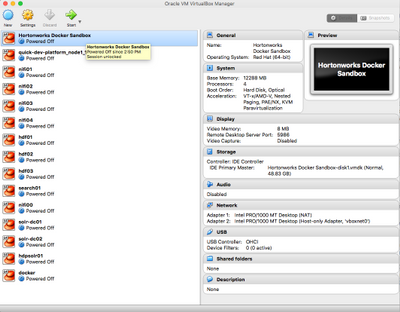 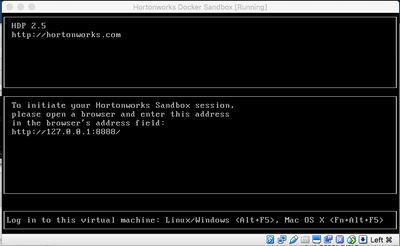 NOTE: It may take several minutes for the virtual machine to start.

Login to the Sandbox VM

You can also login to the sandbox VM directly using the VirtualBox VM window by following the instructions on the VM window. On the Mac you click in the VM window and press the Alt/Option + F5 keys. You should see something like this: 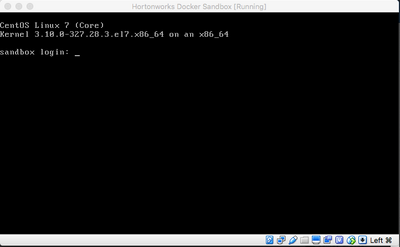 The username is root and the password is hadoop.

The sandbox Docker container is set to autostart when the VM starts. I've run into issues trying to top the Docker container. So we'll use a workaround to temporarily disable the sandbox.service. The sandbox VM is based on CentOS 7 and uses systemd.

Now we need to reboot the VM so we can get it started without the sandbox container running. You can do this easily using the init command.

The VM should reboot.

After the VM reboots, login again using the steps provided above. The sandbox start script is located at /root/start_scripts/start_sandbox.sh. This script has the docker run command which creates or starts the Docker container. We need to edit this script to add our additional ports. For the purposes of this tutorial, we'll add port 8440 which is used by Ambari agents to talk to Ambari server.

Scroll down until you see:

We need to add a line after the last port entry. Modify the script so it now looks like this:

Now save the file

Since we booted up the VM at least once, the sandbox container will already exist. The startup script will not and cannot update an existing container to add another port. So we need to remove the existing sandbox container. The startup script will create a new container with the added ports. Remember with Docker that a Docker image is like a blueprint to the building and a Docker container is the building created from the blueprint. We will delete the container, not the image.

Now we need to enable the sandbox service so it auto starts when the VM boots up.

Now it's time to reboot the VM. As before, we'll use the init command

After the VM reboots, login again using the steps provided above. We are going to show the running Docker container using the docker ps command. 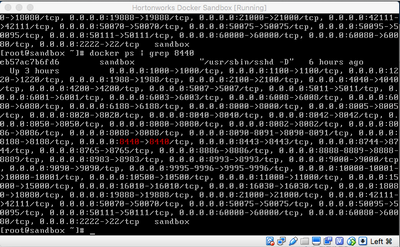 Now we need to update the forwarded ports configuration for our VirtualBox VM. Using the VirtualBox user interface, right-click on the Hortonworks Docker Sandbox to display the menu. You should see something similar to this: 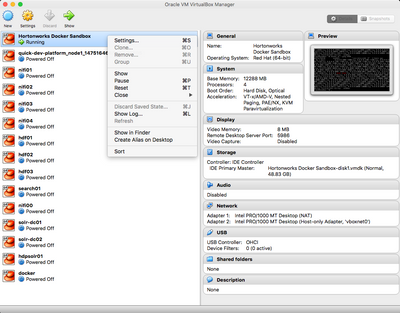 Now click the Settings menu option. You should see something similar to this:

Now click on the Network menu icon. You should see something similar to this: 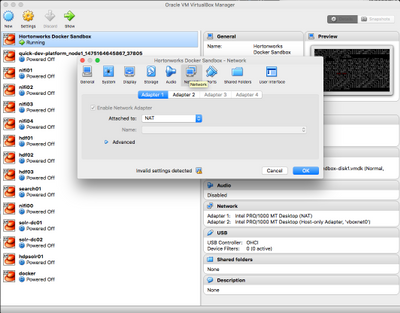 Now click the Advanced dropdown menu near the bottom. You should see something similar to this: 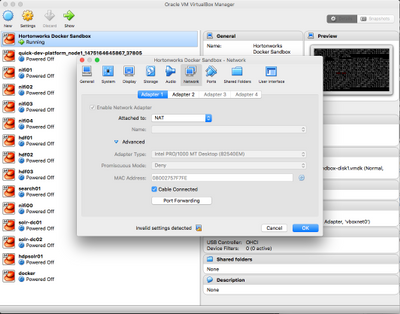 Now click the Port Forwarding button. You should see something similar to this: 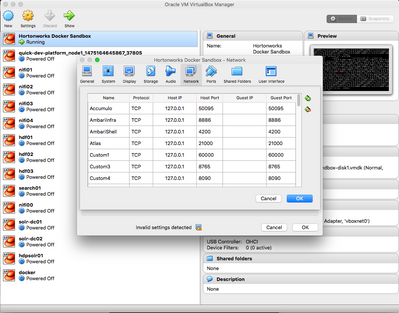 Now click the + icon near the upper right to add another port forwarding rule. You should see something similar to this: 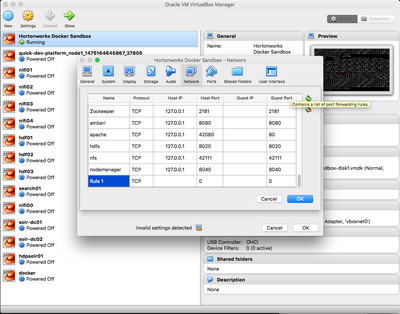 Now add an entry with the following info: 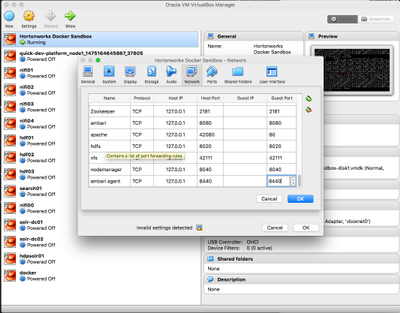 Now port 8440 should be accessible on your computer which is forwarded to 8440 on the VirtualBox VM which is then passed to the Docker container.

If you successfully followed along with this tutorial, we were able modify the Docker startup script for our sandbox container with the VirtualBox VM to add another port. After removing the Docker container and restarting the VM, a new Docker container was created with our additional port.

Re: How to add ports to the HDP 2.5 VirtualBox Sandbox

hello, thank you for this post. I still have issues though. Does docker rm sandbox removes files from my directories?

Re: How to add ports to the HDP 2.5 VirtualBox Sandbox

Is this workflow similar for HDF 3.1 Sandbox? If not, kindly let us know the changes.

Explore the Community
Already a User?
Sign In
Don't have an account?
Register
Coming from Hortonworks? Activate your account here
Version history
Revision #:
2 of 2
Last update:
‎08-17-2019 08:19 AM
Updated by: