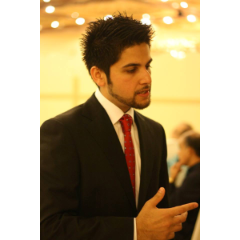 This might come across as a very naive question as I have never used Linux before. I was wondering where can I view the files inside the sandbox like hadoop configuration files? What is the path? Data files on the data node??

I should log onto the sandbox via the command line via root and where should i navigate to then.

I was thinking of configuring a GUI (Gnome) for the sandbox, but unfortunately every simple task has proven to be more difficult than I expected. I do find answers to the problems that I face, online but unfortunately mostly the solutions would not work for me.

I have trouble turning off the firewall in the sandbox (Centos 6.8)

I have trouble installing Gnome because I get no package available etc.

Lastly is this necessary? or if i have ambari I do not need to install the GUI?

Trouble in pinging my machine from the guest.

@Arsalan Siddiqi, I'll try to answer the several pieces of your question. 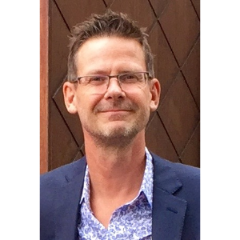 I recommend you to use Ambari as it will give you access to all configuration parameters and also to data files in HDFS by using the Ambari File View.

Please be aware that if you are using Ambari, any changes to config needs to be done through the Ambari GUI or API and editing the config files directly will not work (they are just a copy of the Ambari config).

Now that I am using NiFi inside the HDP.....and say i am using the GetHDFS processor..... what and how should i specify the path to the HDFS configuration files?

where is the core-site.xml file located? 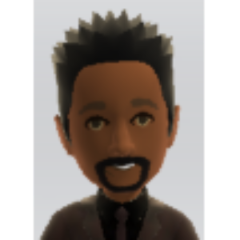 I agree on using the Ambari Files View on navigating around the HDP cluster when learning, it makes life a little easier :)

To answer your question, the *-site.xml files for the core hadoop components on an HDP cluster are located in /etc/hadoop/conf Other frameworks/technologies likely will have their own folders, such as Pig being /etc/pig/conf

@Arsalan Siddiqi, I'll try to answer the several pieces of your question.

@Matt Foley Thankyou for your detailed reply.....unfortunately the ssh connection to transfer file does not work and i keep getting the connection refused error.... i have tried everything mentioned here...SCP Conn Refused

The last thing i would want to clarify is why when i connect via Putty to root@127.0.0.1 p 2222 in windows and do a "dir" command, i see different folders as to when i do a DIR in virtualbox terminal??

@Arsalan Siddiqi , Sorry you're having difficulties. It's pretty hard to debug access problems remotely, as you know, but let's see what we can do.

Let me clarify a couple things: Is it correct that you are able to use:

to connect over ssh in putty, but when you use:

it rejects the connection?

You are using Windows, correct? I'm a little confused about how you're connecting through Putty, as I remember Putty wanting the connection info in a dialogue box before the connection, whereas on a Mac or Linux box, the terminal application just opens a terminal on the box itself, and you then FURTHER connect via typing the ssh command.

Worst case, if you can't get any of these working, you've already established the Virtualbox connection for the VM. WIth some effort you can figure out how to configure a shared folder with your host machine, and use it to pass files back and forth.

So you can see in the pictures below... i used putty... then ssh via the sandbox terminal.... i got the file transfer part working using PSCP.... 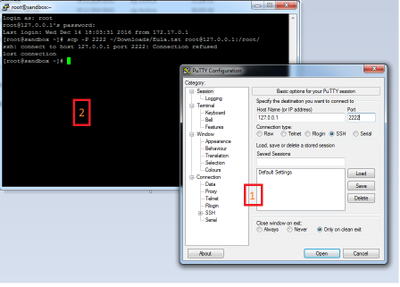 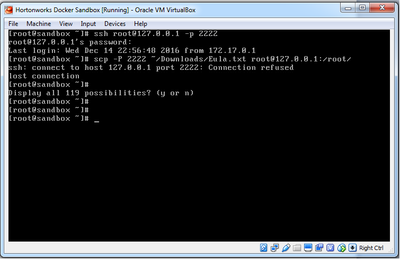 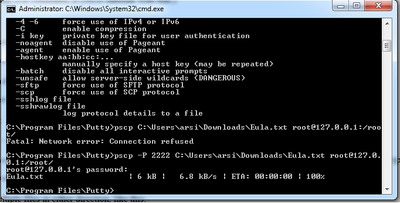 I'm glad `pscp` (in a cmd window) worked for you -- and thanks for accepting the answer.

Your last question, "why when i connect via Putty to root@127.0.0.1 p 2222 in windows and do a "dir" command, i see different folders as to when i do a DIR in virtualbox terminal??" is a puzzler. I would suggest, in each window (Putty terminal and Virtualbox terminal), you type the linux command `pwd`, which stands for "print working directory". It may be that the filesystem location you are ending up at login in the two tools is different. Also you can try the linux `ls` command.

@Arsalan Siddiqi Can you post screenshots of the virtual box network settings (specifically, adapter 1 and adapter 2), and also the output of ifconfig?