The purpose of this article is to explain what Process Groups and Remote Process Groups (RPGs) are and how input and output ports are used to move FlowFiles between them. Process groups are a valuable addition to any complex dataflow. They give DataFlow Managers (DFMs) the ability to group a set of processors on to their own imbedded canvas. Remote Process groups allow a DFM to treat another NiFi instance or cluster as just another process group in the larger dataflow picture. Simply being able to build flows on different canvases is nice, but what if I need to move NiFi FlowFiles between these canvases? This is where input and output ports come in to play. They allow you move FlowFiles between these canvases that are either local to a single NiFi or between the canvases of complete different NiFi instances/clusters. 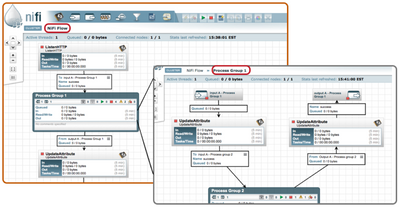 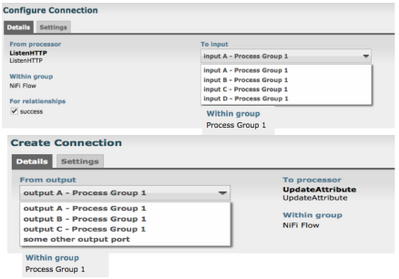 Every input and output port within a single process group must have a unique name. NiFi validates the port name to prevent this from happening. 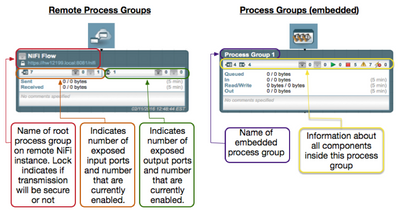 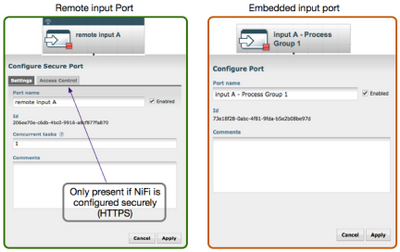 If your NiFi has been configured to be secure (HTTPS) using server certificates, the remote input/output port’s configuration windows will have an “Access Control” tab where you must authorize which remote NiFI systems are allowed to see and access these ports. If not running secure, all remote ports are exposed and accessible by any other NiFi instance.

The Source NiFi (standalone or cluster) can have as many RPGs as a DFM would like. You can have multiple RPGs in different areas of your dataflows that all connect to the same remote instance. While the target NiFi contains the input and output ports (Only Input and output ports added to root level process group can be used for Site-to-Site Flowfile transfers). 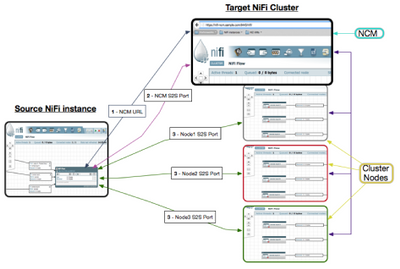 A DFM may choose to use Site-to-Site to redistribute data arriving on a single node in a cluster to every node in that same cluster by adding a RPG that points back at the NCM for that cluster. In this case the source NiFi instance is also one of the target NiFi instances.

Thanks for this nice article. I experimented a little with RPGs and I notice that although you can have multiple RPGs in different areas of your dataflows that all connect to the same remote instance, the source Nifi can send their FFs to the multiple "copies" of the RPG, however they will not receive their corresponding FFs from the RPG they sent them to, instead FFs will all be sent out to the same calling point (I guess it is the first one set on the canvas). Is that expected behavior? If so, doesn't it limit reuse of RPG substantially?

I a not sure i am following your comments completely. Keep in mind that this Article was written against Apache NiFi 0.x versions. The look of the UI and some of the configuration/capabilities relevant to RPGs have changed as of Apache NIFi 1.x.
-

Keep in mind the following:

1. The NiFi with the RPG on the canvas is always acting as the client. It will establish the connection to the target instance/cluster.

2. An RPG added to the canvas of a NiFi cluster is running on every node in that cluster with no regard for any other node in the cluster.

3. An RPG regularly connects the target NiFi cluster to retrieve S2S details which include number of nodes, load on nodes, available remote input/output ports, etc... (Even if URL provided in RPG is of a single node in the target cluster, the details collected will be for all nodes in target cluster).

4. A node distribution strategy is calculated based on the details collected.

During the actual sending of FlowFiles to a target NiFi instance/cluster remote input port, the number of FlowFiles sent is based on configured port properties in the RPG. So it may be the case that those settings are default, so FlowFiles are not load-balanced very well.

For more info on configuring your remote ports via the RPG, see the following article:

*** above article is based off Apache NiFi 1.2+ versions of RPG.

Maybe I can simplify my point by seeing RPGs just as functions with inputs and outputs, or servers with requests and responses. If I call the same function in various places, I expect to receive the output matching my input each time. But with RPGs, I copied the same twice on my canvas and called them with different flow files, all responses came out of the same. Maybe RPGs are not meant for that and the analogy with a function does not hold.

Is it still the best practice to create say 100 process groups for 100 dataflow/etl pipelines each of which has multiple processors in each pipeline. Wont 100 process groups be difficult to see on a single canvas? Or any better way so we can easily see and search the 100 ETL pipelines using some filter like name, userid, date etc. to narrow down the list.

You can name each of your process groups uniquely by name that identifies the ETL pipeline it contains.
Then you can use the Search box in the upper right corner of the UI to search for specific ETL process groups. You are correct that having 100 PG on a single canvas, if zoomed out far enough to see them all, would result in PG boxes rendered without the visible names on them.  So if the PG were not named making them easy to search for. the only option would be to zoom in and pan around looking for a PG you want to access.

There is no way to enter some search which would hide some rendered items and highlight others.  All items are always visible, so unique naming when dealing with large dataflows is very important from a usability perspective.  Every component when created is assigned a Unique ID (UUID) which can be used to search on as well.

If each of your pipelines does the same thing, but on different data, creating a separate dataflow for each would not be the most efficient use of resources.  Maybe better to tag your data accordingly and share pipeline processing where it makes sense.

Thanks @MattWho , actually found a way to filter/search process groups by name using the Summary option in the top right menu. This is very useful to find all the ETL pipelines once we give proper names and then by entering a part of the name we can show all matching Process Groups. Being a newbie I am trying to compare Streamsets UI to Nifi UI so I can work the same way. Streamsets provides an initial list of all ETL pipelines to filter by name etc. I guess if just after Nifi login if we saw two links: Summary and Canvas then users can click intuitively on the summary screen and review all their Process groups and click on specific PG they want to work with. This would make it similar to other ETL tools like Streamsets.