- Only fail tuples if there's a recoverable exception

- Configure parallelism based on throughput requirements (use Throughput Equation to calculate)

- Check the topology stats from the Nimbus UI

- Look for Failures (in spout or specific bolt) if any that module is having issues.

- Now find out what supervisor the worker is running on and start tailing the logs of the topology (log files are named by name of the topology and the deployment number; you can find this from the nimbus ui)

If you are seeing lag building there can be 2 major reasons for this:

- a topology component is slow (bolt or spout)

- the end sink is having issues; again sink specific exceptions will be present in output of the error bolt; follow instructions above to see the logs

Topology issues due to slow bolts

Topologies can have performance issues because some bolts are running slow. Bolts can be either be running slow due to 2 root causes:

1. the system they interact with is slow

2. the topology received a data spikes

**How to find out what's the root cause of a slow bolt?**

Analyze the capacity numbers and execute latencies, a slow bolt is the one with capacity >1.0 meaning there aren't enough bolt instances for the amount of data being processed. Now next step is to find out if the root cause is external system slowdown or data spike.

If execute latencies are reasonable i.e. around your normal value the external system is not the bottleneck therefore the root cause is data spike.

External system bottleneck should be resolved before topology performance can be restored. Sometimes it may be beneficial to pause or stop the topology in order to recover the external system e.g. topology based data ingestion.

``Note: Add more executors only when the bolt latencies are low or code is linearly scaling``

Calculating current throughput Vs. expected throughput is critical for determining the correct configurations for parallelism and worker count.

``Note: Adding more executors doesn’t solve the problem if the supervisors are saturated``

Adding more workers to the topology to evenly balance out the load across supervisors is critical for good performance. If there are more executors scheduled per worker than there's CPU capacity for that worker this will result in CPU resource contention leading to cascading performance effects across other topology workers running on that supervisor. A key way to analyzing over allocation is summing the number of executors in the cluster and dividing them by sum of CPU cores across all supervisors. If this number is greater than 2 than you have overallocated resources however this may not result in performance issues as overallocating executors for IO bound bolts is sometimes required for performance and parallelism.

Tuple failures happen because of 3 reasons:

Tuple timeouts are the trickiest to resolve. They could happen due to any of the following reasons:

Explicit failures will be shown in Nimbus UI, in failure counts corresponding to the respective bolts.

Storm has the concept of slots which can only allow to limit saturation and overallocation on memory but not CPU / threads. This is something that has to be manually maintained by engineers as in be careful not to over provision number of threads (executors) / workers. Symptoms: topology will appear to run slow without any tuple failures however lag is going to continue to build.

I am new to HCP and Storm, I am running though the squid use case. From Kafka console consumer, my kafka is receiving data, and from metron UI, my squid sensor is running but throughput is 0kb/s, from Storm UI squid topology is active and 1 worker 5 executors, but data not coming in to the topology. The logs in storm/workers-artifacts for worker.log.err is empty, for worker.log it stopped below image. 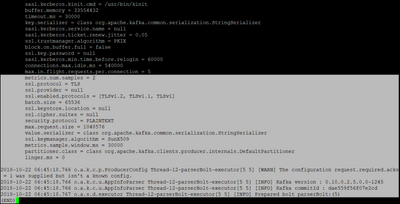