I am trying to add two more hosts to my existing cluster (only has one right now) but I am running into errors during the Ambari step - Confirm Hosts. The error message is shown below. It says it failed because it finished with a non zero exit code. What does this mean and how can I fix it? I have followed the steps to configure passwordless ssh but I may have done something incorrectly. I have replace the host name with a bunch of x's.

This is related to your ssh keys

Make sure that you test this

make sure permissions on the public key are set as per the documentation. You can also manually install the ambari agent. Copy the ambari.repo file from a working machine to this machine and put in /etc/yum.repos.d/

then ambari-agent start and try your registration process again.

I have seen that file before and just double checked to ensure all the servers are in the list.

This is related to your ssh keys

Make sure that you test this

This can save you lot of time http://docs.hortonworks.com/HDPDocuments/Ambari-2.2.0.0/bk_Installing_HDP_AMB/content/_set_up_passwo...

I noticed I hadn't set up passwordless ssh between the two I am setting up and that helped but now there's another error. The servers I have are not configured for DNS (will be soon) and are only accessible via IP address. Would this be a factor during setup? 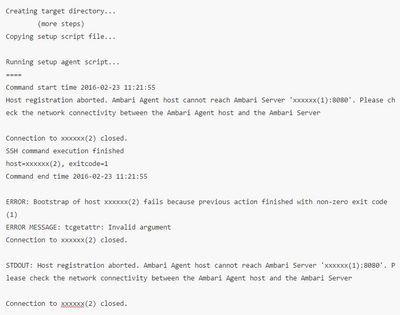 @Mark Thorson Yes, please do not use IP for the host config. You can levergae /etc/hosts but I suggest to wait for the DNS

@Mark Thorson How did it go?

Still waiting on the DNS to be set up. I will update once work has been completed and I try adding the nodes.

DNS has been configured but I still got an error message. One of the nodes I got the initial error I posted and the other I got the second error. What do you mean by leverage the /etc/hosts? @Neeraj Sabharwal

Make sure that you modify the ambari.ini for agents to point to correct ambari server. Link

Alright sounds good. Just to confirm the hostname I should enter would be the server Ambari is running on? Also would the hostname be the FQDN or the DNS name of the server? @Neeraj Sabharwal

I had success during the "confirm hosts" stage for one of the servers. During the install I received the attached error message stating it requires fuse but I am unsure what this is. @Neeraj Sabharwal

I retried the install and the error message did not appear this time. I was able to set up one of the two new servers with a couple warnings.

I tried to manually install the other server the same way but am getting a blank error message just stating the registration failed. When I look at the repolist something doesn't seem right here. It doesn't look like the table shown in the reference guide. @Neeraj Sabharwal

1) You are installing ambari server in one of the nodes

2) You are manually installing agent in all the nodes

I won't worry about table yet.

You should go ahead and do the install

and yum install ambari-agent --> in all nodes

@Neeraj Sabharwal Yeah that is correct. I have installed Ambari Server on 1 node and Ambari Agent on all 3. The image below is the 3rd server. When I attempt to perform manual registration for this server I get an error message saying the code below.

@Mark Thorson Good news!!! 🙂 We have agent there already

The ini file in 3rd server.

What step are you on now?

@Neeraj Sabharwal I took a closer look at what I typed in before on the ini file and realized I made a typo in the server hostname. I fixed it and got everything installed and working! Thanks so much for your help getting my cluster working. I wouldn't have been able to do it without your support!